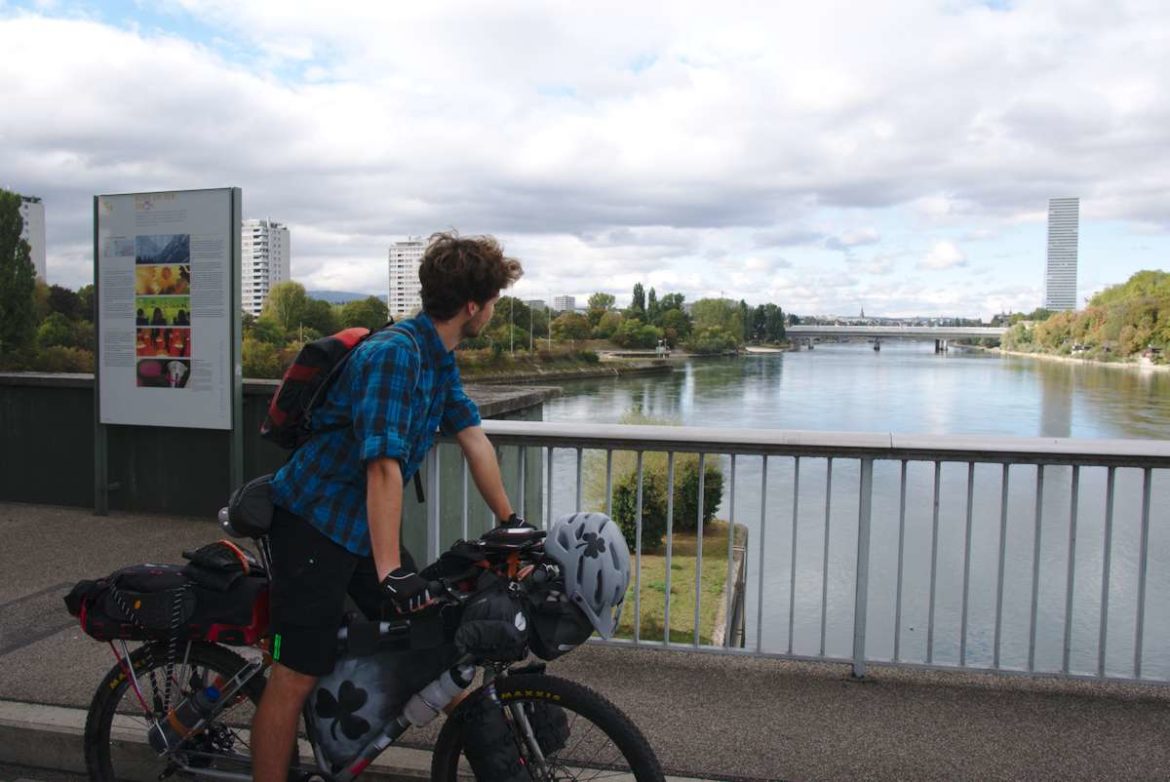 A bike journey around the world starts with the first pedal stroke.

Too bad when the pedal breaks off. My two brothers and I had just covered the first twenty kilometers when we heard a “clack” and Christian’s mountain bike only had one pedal left. We weren’t able to explain how something like this could happen. Even my most functional tool could not fix the pedal to the bike again. What to do? In Bad Säckingen, about ten kilometers away, there was the next bike shop. But how to get there? Towing with a rope? Did not even work for a few meters. Hold on to the shoulder and pull? Went very slowly and only for a short distance. So good that Edith, my neighbor, spontaneously decided to join us as far as Bad Säckingen. She somehow managed to find hold and ride the bike on the piece left over from the pedal. The bikes were quickly exchanged and in no time we arrived in Bad Säckingen, where a new pedal was set up immediately.

What a great start of my tour! And I actually don’t want to sound ironical here. For what is better than to be taken off some illusions right at the beginning: On such a trip, not everything goes “smooth”, many difficulties will show up – and in the future, the next bike shop or an helping hand won’t just be found around the corner.

On Monday, the 24th of September, it finally started. After weeks preparing myself, getting rid of almost all my possessions and saying goodbye to so many beloved people, I was ready to make the first pedal stroke. Again some people came to say goodbye. Somehow I felt bad though. After all the stress of the last weeks I was not too keen to ride. Where did the enthusiasm of the last months go?

It was very helpful that I was not on my own. My brothers both could take a vacation to accompany me for two days. At this point I especially want to thank the two women who have let the newly married men go. Thanks to both of you!

After the little incident with the pedal we went in wind speed to the Rhine Falls near Schaffhausen, where we had booked a youth hostel. In this case, “wind speed” actually doesn’t mean fast, but slowed down by the constant headwind. This excluded the emergence of another illusion: I will not always be accompanied by tailwind. But “headwind shapes the character”. At least that’s written on the T-shirt a befriended family had handed me over as a farewell present. I hope so.

Only at dusk we reached the Rhine Falls. Our mother and her partner were awaiting us. Another farewell followed.

Today we cycled up the Rhine to Konstanz. The headwind had not decreased, but the sun was shining and the view onto the distant Bodensee motivated us to keep doing more pedal strokes. After a last meal together, we then said goodbye on the shores of the Bodensee. How long had I been afraid of this moment! Now it was time to say goodbye to the last companions and actually be alone on the road.

Now I distract myself by drinking coffee and writing the first blog entry. While doing this, I tell myself: melancholy makes little sense now. A long-cherished plan and dream is coming true. It is time to look ahead now.

I will first set off for the Alps and Austria. From there I would like to head down to the Balkans and Turkey. But where the way will lead me exactly, I won’t yet plan. The first pedal stroke is done.

Can you tour Iraq by bike? – A few hints and tips

Croatian off season and hinterlands