Croatian off season and hinterlands 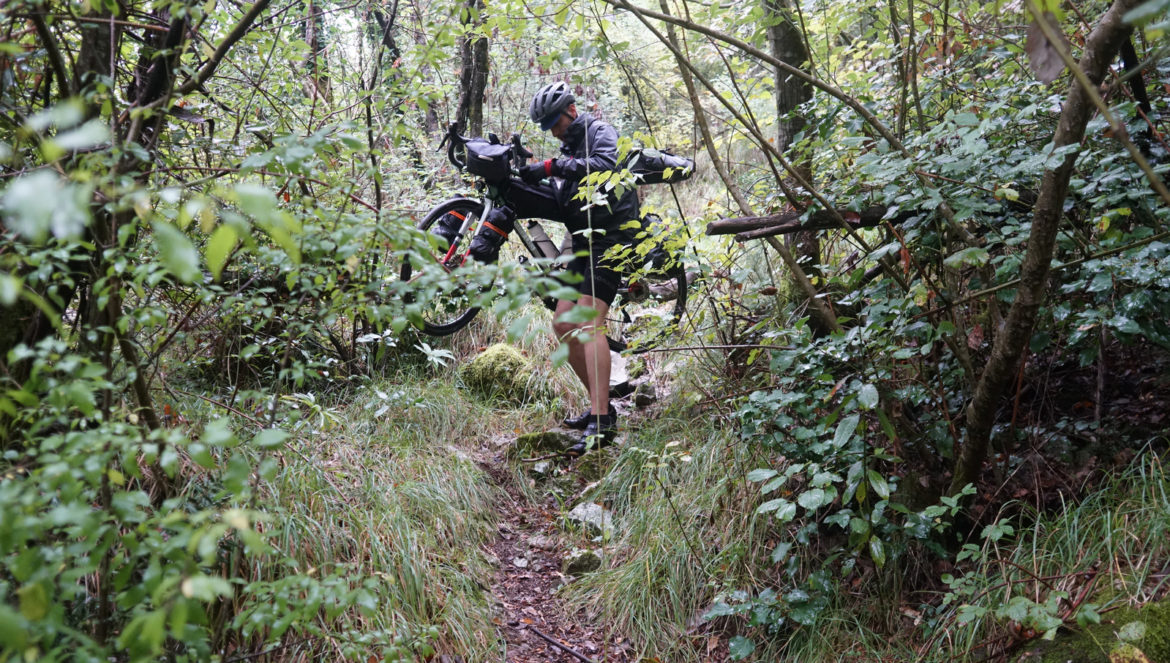 I was a bit afraid, traveling through Croatia by bike. The last years I met so many people who told me that they went on holidays to Croatia. This country had to burst from tourists, I thought. At some places, that turned out to be true, but as soon as Christof and I took the side roads, everything changed and we discovered the from tourism untouched Croatian hinterlands.

On the road with Christof

From southern Slovenia onwards, I was traveling with Christof again. He comes from Aachen, quit his job and wants to travel till (more or less) December the Balkans, before he starts new work. Traveling with him is very easy-going and uncomplicated, which you cannot take for granted. Our rhythm is similar and we share the same travel attitude. Whenever one of us suggests a stop for eating or drinking coffee, the other one never disagrees – a good thing.

Only our bikes have a very different setup and are packed for different occasions. Mine is made for gravel roads and the mountains, whereas his bike feels comfortable on asphalt and roads, that are not too rough. That means, that Christof is faster on pavement, whereas I have to wait for him after downhill sections.

Despite these different preconditions, we decided in Ilirska Bistrica to follow the Bikepacking route Adriatic Crest for the first kilometers. We already read some reviews, that warned: “Very steep ascents”, “many push a bike sections”, “at some points you won’t find water for a long time” and so on. Still we didn’t just want to follow the big street along the coast. So we took the risk.

It hit us already in the first day: Not only was it necessary to climb a very steep and loose track on to 1200 meters, but in addition there was coming in some heavy rainfall, which didn’t stop till next day. We pushed and carried our bikes more than we rode them. Soon we were soaked like a swamp despite our super functional rain gear. We were far away from civilization though, so there was nothing else to do but to cycle on, to push and follow the arrow on the navigation device. We fought kilometer for kilometer and watched out, not to stop to long, so that we would get chilled through.

That was one of those days you never wish to experience; but still I was sitting on my bike at times and somehow felt comfortable. I felt like a warrior, who fought himself through most unfavorable conditions. Well, a real adventure looks different, I know. Probably there are some much more harsh days and weeks still waiting for me. But still, it was a good experience – especially, as we reached the Croatian coast after hours. We saw the first tourists in German cars and felt like winners.

However we agreed: This bikepacking route we can not follow the whole time. We decided to follow our own mix of Eurovelo 8, the bikepacking route and some modifications on our side. On that way we continued with the ferry on to the islands of Cres and Krk.

The vegetation on those islands is quite different to that on and behind the first mountain ridge. We continued to make this observation the following days: In the hinterlands, everything was green, the nights were cold; cycling only a few kilometers back to the coast meant seeing much more barren countryside, the nights were much more mild.

What is true for the vegetation and weather matches exactly with the people as well: When we reached the coast, immediately we were surrounded by many (mostly German) tourists. At some points I saw more German than Croatian number plates on the cars. It was off season by the way! I can’t imagine what it must look like during high season. Also the natives seem quite uncommunicatively, they looked tired of all those tourists.

How different the people meat us along the streets into the mountains! Here we came much closer to the natives and discovered pretty, little villages, that seldomly see a tourist – it’s quite paradoxical, that all the tourists surge to the coast.

One day, we were rolling on a quite road and apparently were surrounded by 25 dogs. Those dogs all belonged to Tihana, a Croatian woman, who lived most of her life in Germany, but since a few years is living in her home country again. Together with her husband she bought an old farm, to adopt untended and maltreated dogs and to impart them to Germans. (On her Facebook site are some pictures of the dogs.)

Lest year Tihanas husband died, which means that she is on her own now with a lot of work (beside the dogs, there are cats, goats, bees, nuts and fruit trees, a garden and a lot more). She receives help from time to time by some volunteers, who work for free board and lodging. She finds time via platforms like WorkAway…

Working for free board and lodging

…or just on the streets. We just stopped to not run down one of the dogs, as Tihana asked us: “Do you want to stay for two days, help a bit and therefor eat and sleep in my hose for free?” Of course we couldn’t resist. We stopped for two days, I helped Tihana with the computer, Christof installed two water taps. In exchange, we enjoyed the luxury of taking a shower and washing our clothes with a washing machine.

Beside us there were Dani and Matias working at the farm. Dani comes from the Netherlands and is traveling since more than three years with her backpack around the world. From time to time, she stops to earn some money and being able to continue the journey. In South America she met Matias, since then they are traveling together. In Croatia they are only because Matias as citizen of Argentina is not allowed to stay in the Schengen area longer than three months.

Working and spending time together with Dani and Matias was very interesting and rewarding. They consciously live a life of freedom and spontaneity, in reverse have to survive with little money though. Anyways you can learn from their lightheartedness and adaptability.

Left houses and traces of the war

After this regeneration we continued our trip down south. The further we came, the more left houses we saw, partly we felt like in the middle of ghost towns. For sure many of the houses were left during the war at the beginning of the nineties. But not in every case we were so sure about that; some houses looked so new, some many centuries old. And in some wooden huts we spotted new curtains, you never could have been sure, which houses really were abandoned.

Besides that we saw many traces of the war along the way. At many facades you see bullet holes, beside the road there are memorial places for killed soldiers (they like to use war machines for that – a tank for example served to remember six killed soldiers). Additionally in some regions you be warned not to leave the road as they are mines still sleeping in the ground. The war is still very present in Croatia.

Speaking of mines: On such bike journey you hear warnings of many types. In the mountains they told us that there are many bears. At the coast there are snakes, we already met a few of them, even though only their dead remnants. In Croatia, they warned us of Bosnia, in Bosnia they will probably tell us to be very cautious in Albania.

Also the refugee topic is talked about everywhere. Tihana told us, that in the last weeks some groups of young men where wandering on the road beside her farm. They weren’t without money. Quickly gossip comes up: Does anybody pays them to travel to central Europe? I hear a lot about those things and can’t really judge. A refugee himself, whom I could ask myself, I haven’t met so far.

That will probably change, when I travel further south. From Split, were I’m resting for one day, I’ll follow the road to Bosnia tomorrow, and after that onwards to Montenegro and Albania.

A little video clip about our journey through Croatia you find here.

Video: Cycling through the Croatian hinterlands

Video: Cycling through the Croatian hinterlands